View source
watch 01:36
We're Getting Mutants in the MCU - The Loop
Do you like this video?
Play Sound

This minigame is played to craft Pickaxes. The higher level Pickaxe you manage to craft, the quicker you will be able to mine once you combine it with a Red Gem on the crafting table.

Slide tiles by touching anywhere on the grid and swiping in the direction you want all of the tiles to move. All of the tiles will ‘fall’ in that direction until they hit a side or another tile. Any tile that slides into a tile of the same type will combine into a higher level tile.

Be careful you don’t run out of space with no other moves, as that means the game is over. At any time, you can hit the ‘Collect’ button, which will take the highest level tool on the grid and add it into your inventory. 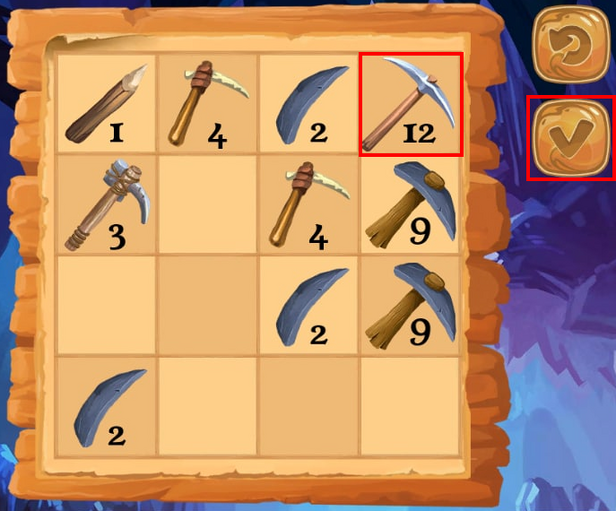 This minigame is played to craft Red Gems. The higher level Red Gem you manage to craft, the quicker you will be able to mine once you combine it with a Pickaxe on the crafting table.

In order to craft magical gems, you first have to mine Raw Gems. Then take the Red Gems you mind and put them into the Red Gem Feeder.

Click anywhere on the game grid to place the Gem currently in queue. Get any three tiles of the same kind in a row or an ‘L’ to combine them into a higher level gem. Hit the ‘Collect’ button to collect your highest level Gem on the board into your inventory.

This minigame is played to gather fruit, which you can use to feed your pets.

Touch any fruit that is directly next to another fruit of the same kind to collect it into your inventory. You can collect large groups of fruit if they are all touching (not including diagonals). The more fruit that is touching in a group, the bigger your bonus, so it can be a good strategy to avoid on kind of fruit until a big pop at the end. Clear entire rows of fruit for bonuses.

There are 2 objectives of this minigame.

First and foremost, this minigame is mainly played to create different types of magic. Magic can be combined with a pet egg on the crafting table to create pets. The higher level magic you use, the more powerful your pet will be. There are 7 branches of magic, one for each corner of the magical heptagen.

In this game you have to draw two magic tiles of the same kind together to make more powerful magic. Different levels of magic have different colours, with red being the weakest and white being the strongest. There are 7 levels in total. 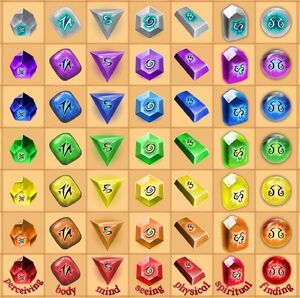 You can select the Magic Emitter (the blue sphere) and press the magic button to create magic tiles. New tiles originate from it, and can be moved. Select the ‘All’ button in the top window to see which items you have discovered. From the All panel you can create new coins directly. Select the trash button to delete items.

Future utility for these coins are for the making of NFTs in the future for community badges.

Background info: This game is called the Heptavita, which young Lit children play to learn about creation. The coins tell a deep metaphysical story.

This minigame is played to gather goods like textiles and also to combine with other food ingredients and spices.

The ultimate goal of the Merge 3 game is to merge sets of 3 items into the next level of the item so that they can eventually collect high level equipment to sell at the shops. If a player merges 5 items of the same kind that are all touching each other, you will get a bonus item (2 instead of just 1 item). To merge items, drag and drop an item onto a matching set of 2 or more contiguous tiles.

Here are the concepts of the game.

This minigame is played to gather base crop for mage food like Pab or other various Pabations.

Slide tiles right, left, up or down to move them and make matches. Match 3 tiles of the same type to collect them. Match larger groups of tiles to create of break special tiles. Slide a special tile to activate its ability.

Community content is available under CC-BY-SA unless otherwise noted.
Advertisement